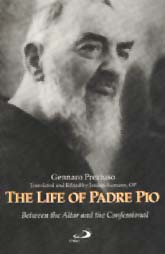 Life of Padre Pio, The: Between the Altar and the Confessional

Over 300,000 devotees of Padre Pio from all over the world were present in Rome on May 2, 1999 when Pope John Paul II presided over his beatification. And these were only a small fraction of those who in one way or another have been touched by this extraordinary man. Padre Pio, Capuchin priest, stigmatist and "humble friar who prays" is one of the most fascinating figures of the twentieth century. Among the countless writings dedicated to telling his story each year, the present biography stands out for it thoroughness and the hitherto unknown information about him which it provides. For the most part it makes use of his own diary and the sworn testimony of those who lived with him and knew him best to reconstruct the details of his long and fruitful life which was literally spent "between the altar and the confessional." An Afterword includes the talk given by the pope the day after the beatification to the pilgrims who had come to Rome for this event . 242 pp.

Title: Life of Padre Pio, The: Between the Altar and the Confessional

Life of Padre Pio, The: Between the Altar and the Confessional