By: By Edith Stein, 2d ed., revised (1996), translated by Freda Mary Oben, Ph.D. Eight essays on the theme of woman and her vocation, with index.

With reason Edith Stein has been called "the most significant German woman of this century." Her writings on woman are the fruit of both reflection and debate with other leaders of the Catholic feminist movement in German-speaking countries between the World Wars. This second revised edition of Essays on Woman includes textual corrections, important new supplementary data, and previously unavailable material on the spirituality of the lay and religious woman. These essays crystallize long hours of experience teaching in the classroom and on the speaker's platform in the pursuit of fulfil...
View More... 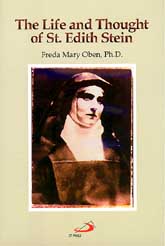 The Life and Thought of St. Edith Stein

As a child and adult, Edith Stein made love of family, friends, and the whole human race a priority in her life. As a German during World War I, she wanted to serve and to heal which she did as a Red Cross nurse. As a woman she wanted to fight for women's rights which she did as a very young suffragette and leader of the Catholic Women's Movement in Europe. Her hunger was to learn, to understand truth and to philosophize. Her seminal work as philosopher and theologian wedded phenomenology to scholasticism and brought her wide acclaim as an innovative thinker. As a convert to Catholicism she wa...
View More...